Do you know how to remove cmos battery in 2022? Even when unplugged, PCs contain a battery on the motherboard that provides a small quantity of power to the complementary metal-oxide semiconductor. This CMOS battery allows the system clock to continue to run even when the computer is turned off, as well as the motherboard to store small quantities of data in active memory.

CMOS batteries often outlast the computer’s lifespan, but if a computer in your office starts losing time, has its BIOS settings reset unexpectedly, or displays a CMOS error, you may need to replace its motherboard battery.

What is the BIOS (Basic Input/Output System)?

Before moving on to the CMOS, it’s critical to understand the meaning of a computer’s Basic Input/Output System (BIOS). The BIOS is a piece of firmware that is pre-installed on your computer. It performs basic but critical duties on your computer, particularly while starting. It sets up your computer’s input devices, such as the keyboard and mouse.

It also runs a power-on self-test (POST) to evaluate the computer hardware before booting into the operating system. It also configures the CMOS, which serves as the BIOS’s non-volatile memory, meaning it saves data even when the computer is turned off. This is only a basic understanding of the BIOS; there are countless additional ideas linked to the BIOS that you can study if you want to learn more.

What Is a CMOS Battery and How Does It Work?

In a nutshell, CMOS stands for “complementary metal-oxide semiconductor” and it stores information such as the time, date, and system hardware configuration. Even when the computer is unplugged, the CMOS and BIOS are kept switched on by the CMOS battery. Because the CMOS keeps track of the date and time in real time, this is the case. 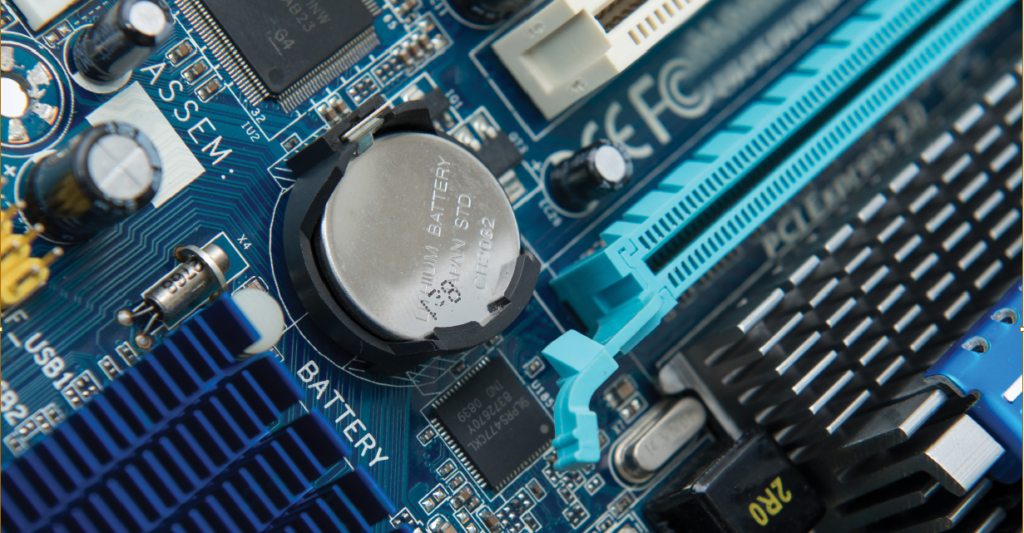 Additionally, as soon as the computer boots, the hardware configuration and system settings must be examined. When the CMOS battery dies, your computer loses all of its data and the BIOS reverts to factory defaults. Most CMOS batteries survive between two and ten years. Because there are several elements that affect this, there is a large range.

If you obtain one of the following errors, it’s one of the last (and probably easiest) signs that the CMOS battery has to be replaced:

Failure of the CMOS Battery

If you observe one of these issues, turn your computer on for a day and then restart it. If the error disappears, the battery has only lost a small amount of charge. This is especially true if the computer hasn’t been turned on in a long time.

Remember how we used a car battery as an example earlier?

CMOS batteries, like vehicle batteries, eventually deplete over time. The battery will not keep enough charge if it is turned off for an extended period of time. That “kick-start” may be all that is required at times, but it will need to be replaced sooner rather than later.

When Should You Replace Your CMOS Battery?

When the CMOS battery is depleted, your computer will begin to behave erratically.

Here are some of the warning signs:

Problems with power on/offWhile there could be a variety of reasons why your computer isn’t booting up at all, a failing battery could be one of them.

Alternatively, the power off button on your computer may stop working. A persistent beeping sound and CMOS error messages could indicate a deteriorating CMOS battery. A CMOS checksum error, a CMOS read error, CMOS batteries failure, and a low system battery voltage are among the error signals.

The CMOS Battery: How to Remove It

Even if you’ve never worked with computer components before, removing the CMOS battery is a simple task. Simply follow the instructions outlined below to get started. Before handling PC components, get rid of any static discharge you may have in your body. Simply touching the metal component of your computer’s cabinet will suffice.

How to Remove a Desktop Computer’s Battery

Remove the cover off the PC cabinet to view the components within. This varies depending on the situation, so see the instructions. Typically, you’ll need to remove cmos battery a few nuts and slide the cover off. Make sure there’s enough light to plainly view the motherboard. Remove any dust that has formed on the surface.

On the motherboard, search for a circular battery. It should be the size of a quarter. remove cmos battery from its place with care. Remember to write down the battery’s positive (+ve) and negative (-ve) sides. In most cases, the positive side will be facing upwards. If you’re replacing the CMOS batteries, do so immediately, making sure it’s in the same orientation as the old one. Replacing the cover on your computer cabinet is a must.

How to Remove a Laptop’s CMOS Battery

Because of the tiny form factor and additional screws, removing the CMOS batteries from a laptop is a little more difficult. In most cases, it is preferable to seek professional assistance. To uncover the inner components, flip the laptop over, detach the bolts, and remove the casing. Ensure that the laptop is turned off and the charging wire is unplugged.

Answers to the questions

How do I remove the CMOS from the motherboard without causing damage?

Push the metal tab away from the battery using a flat-head screwdriver. It shouldn’t take much pressure for the battery to pop out.

Is the CMOS batteries the same as the one used in battery key fobs?

Yes, that is an excellent question. The CR2032 is used in a variety of products, including calculators, wrist watches, medical devices, toys, and more.

Is it possible to run a motherboard without a battery?

Yes, technically. Removing the battery will allow your computer to boot, but you will lose the date and time settings, and you will have to choose the drive where the OS is installed every time you start your computer.

Is it possible to reset the BIOS by removing the motherboard battery?

This is a fantastic question that I am frequently asked. Yes is the quick answer. If you disconnect the battery, wait around 5 minutes before reconnecting it.