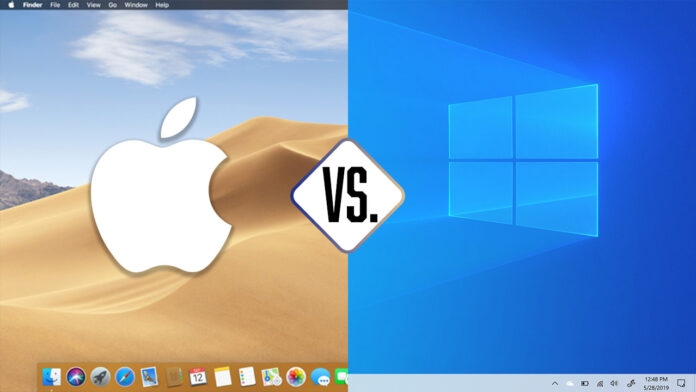 Microsoft Windows and Apple iOS are the 2 most popular operating systems out there, but how do you choose which OS is right for you?

One way to compare the functionality of Microsoft vs Apple is to look at the different productivity tools each company offers their users. By understanding more about how each company’s productivity apps work, you can make an informed decision about which operating system suits your needs.

Microsoft Office is by far the most widely used suite of software for editing documents, spreadsheets, presentations, and more. Apple’s answer to Microsoft Office is iWork, a similar suite of productivity apps for your iPad, iPhone, iMac, or Macbook.

If you grew up using Windows, you’re probably already familiar with Microsoft Word, Excel, and PowerPoint. These have basically been the go-to productivity tools in schools, universities, and offices for the past few decades.

Though less widely used, iWork is a viable alternative to Microsoft Office Suite. Let’s take a look at some of the key differences and similarities of these 2 productivity suites for Windows and iOS.

One benefit of using Microsoft Office is that you can download it on any device, including Apple devices. So, if you like the aesthetic and other functions of iOS, but are used to working with Microsoft Office Suite, that’s an option. On the other hand, iWork is not cross-compatible with Windows devices.

Many Apple users prefer iWork over Microsoft Office because of its clean, intuitive interface. It has limited menu options and makes the most used features very easy to access and figure out. However, some users may find this simplicity limiting when trying to create more complex documents or spreadsheets.

Both Microsoft Office and iWork offer cloud storage options. Like all other Apple device data, iWork data is stored in your iCloud. Microsoft Office users can save files to OneDrive’s cloud storage. Microsoft also offers fully online versions of Word, Excel, and PowerPoint as part of its Microsoft 365 subscription, so you can work on files in the cloud from any device.

Microsoft Office vs iWork: The Apps

Both Word and Pages have similar functionality in terms of creating and editing text documents and both are very easy to use. One key difference is the built-in charts feature in Pages. You can only add a chart to Word if you also use Excel.

Word does offer users more options for text editing than Pages, though. For example, it has more formatting options and review features like a built-in word count tool and a spell check tool.

Most users agree that Excel is easier to work with than Numbers, while Numbers is more aesthetically pleasing. Excel seems to be the better option for professional use because it has a higher number of functions and they’re easier to find and use.

Either Excel or Numbers will work just fine for creating basic spreadsheets but, for those who want to manipulate more complex data, Excel is the stronger app.

You’ve probably noticed the trend by now that Apple’s productivity suite apps are more design focused than Microsoft’s, and Keynote is no exception. Both PowerPoint and Keynote can be used to make sleek, stylish presentations, but users may find Keynote to be simpler and more intuitive.

Which Should You Choose?

There are a few other factors to consider when trying to decide between Microsoft vs Apple productivity suites.

For starters, there’s the price: iWork comes included for free with any new Apple device, while MS Office costs somewhere in the range of about $70-$100 for an annual subscription. The good news for those who prefer Office is that Microsoft has announced it will offer a new version for Windows 11 for a one-time flat fee.

iWork also has more options when it comes to built-in templates, which makes it quicker and easier to design eye-catching documents, spreadsheets, and presentations.

Microsoft Office has been around longer, and in general has more robust capabilities for those who know how to use it. Since it’s so widely used, it’s also very easy to find an article or a tutorial about anything you don’t know how to do.