The Grand League winning strategy for the Dream11 Players 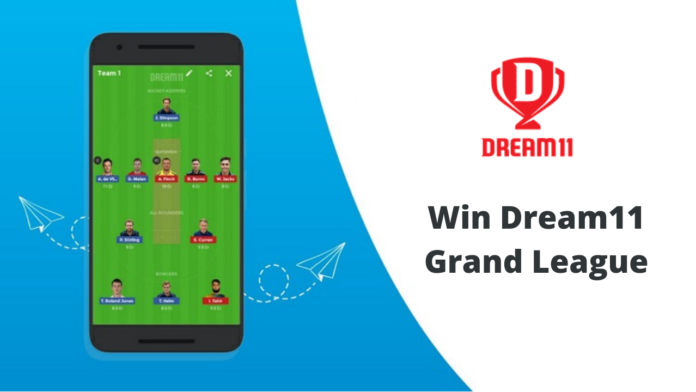 In today’s Dream 11 tips and tricks segment, we shall let our fans know how to win the grand leagues on this fantasy application. The strategy is for those who have an enormous appetite for winning grand leagues on Dream 11.

Every user on the Dream 11 application wants to win. No one on planet earth plays the cricket fantasy for losing all of their money. Some people always dream of winning big on the Dream 11.

Many websites provide the Dream 11 users the best platform to win just on Dream 11. In this blog, we will provide our users with tips and tricks to win the grand leagues for our users on Dream 11, which has been a number one fantasy application.

But before letting our users know about how to win the grand leagues on Dream 11, We want to tell you that the ordinary users do not play the grand leagues, are played, and won by the Grand users, and that is why it has been named as Grand Leagues.

This is because the Grand users don’t make the same team as the ordinary users. If the users want to play grand leagues on Dream 11, they should be splendid. If they are not, they should not worry as we shall give them the tricks on how to win the grand leagues on India’s number 1 fantasy app.

The users first need to create a team list for a specific format, and then they can pick an eleven, which will help them rank high in the grand league Dream 11.

It might seem Funny but Focus on the Worst Performer – It is essential to look at the talented players’ performance and poor players of the previous matches. Some may think it’s not our job. But many factors will help the users to win the grand leagues on Dream 11.

Due to the poor performances, there are many players who still warm the bench. The users should analyze these performers so that they will not pick them again in their playing XI. The users should keep in mind those players and allow some fresh faces to be on the field, and that player may become the captain of the team.

Because of the repeated poor performances, the management drop the players from the squad. The Team management doesn’t think about those players even once. They only think about winning and the past score of the players. The players’ previous score should be looked at on Dream 11 as well, which will give a chance to a new player in their team.

For winning grand Leagues on Dream 11, the users need to have a fair calculation of maths because these calculations may be a reason for the opponent’s proper time in fantasy leagues. It is beneficial to apply maths in fantasy sports as many of the Dream 11 users have been using this trick in small and grand leagues, helping them win prizes.

The Strategies–In Dream 11, there is no proven strategies to win grand leagues. But One can work on their plan, try it, and give the users a correct result.

Tough to win? Yes, it is tough to win any contest on Dream 11. There are millions of people playing the various competitions, including grand leagues on Dream 11. That is why it difficult to win because many people use their unique skills and make it more competitive.

Over six teams on Dream 11? Only one user can play six teams. But the Dream 11 doesn’t allow six teams for just one person. That is not permitted.

Strategies on Offer? The users should trust and develop their plans. Dream 11 doesn’t give any of those to any of its users. But the users can access Sports Guru, which offers fantasy cricketing tips for the fans.

The fans, readers, and users should follow our Dream 11 prediction for a very cricket match if they wish to make more money.

the tips and trucks of the grand leagues are for those who love the game, and they want to make more money simultaneously.

Winning any contest on Dream 11 requires a lot of skill. If the users find any problems or have any doubts, please comment and contact us.

Focusing on a single player doesn’t help in Dream 11. The users need to find which format in the match is on. Then they should make a strategy of the team based on the limited-overs and longest form of Cricket.

Some players are tailor made for all three formats, while some give excellent performance in the limited-overs or the Test format. That’s why the users should look at the form before making the team. If there is a T20I match, they may pick a youngster who thrives on playing such formats, and they should keep a Test specialist in the Test matches because that player is most comfortable while playing the longest format of the gentlemen’s game.

All three formats need the best bowlers. The users should not hesitate in picking the bowlers in their playing eleven. Often, the bowlers make the team win online match prediction, and they also help the users achieve the maximum points in the fantasy league.