Cemu Emulator: How to Play Wii U Games on Your PC 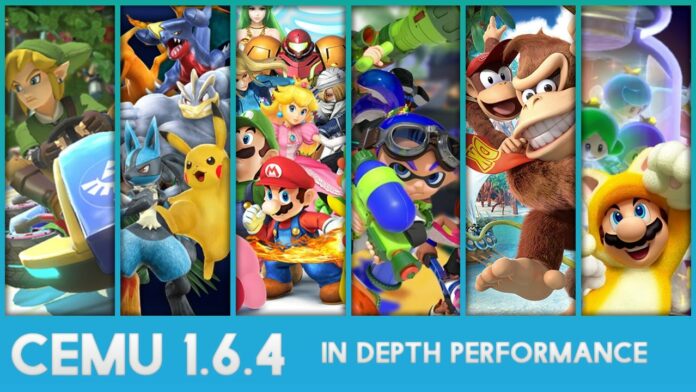 Cemu is an amazing Wii U emulator that can run all of your Nintendo games on a PC with remarkable quality levels and up to 4K resolution. Cemu is presently capable of running a wide selection of games at 1080p/60fps, and with each new update, it expands its compatibility range.

Cemu Games such as Super Mario 3D World, Captain Toad Treasure Tracker, and Xenoblade Chronicles X can run without bugs or frame rate drops. Furthermore, it is possible to adjust many elements of the emulation and load presets for certain games in order to optimize each title and apply various resolutions independently.

Controls may be emulated with either the normal Wii U remote or the Pro or classic controller. Given that many games do not require a touchscreen to function, you may use a mouse or external touchpad without issue and run the buttons any way you see fit.

Cemu is an outstanding emulator that allows you to give your Wii U games a new lease of life owing to its superb performance and significant graphic upgrades made to the original console’s basic aesthetics. The Wii U has been wrongly criticized.

While Nintendo’s seventh home console hasn’t even scratched the surface of its predecessor’s sales, it has amassed a solid gaming library that includes some truly brilliant first-party titles like Splatoon and Mario Kart 8, as well as quirky third-party exclusives like Bayonetta 2 and Xenoblade Chronicles X.

While the Wii U can compete in terms of games, it is obviously weak when compared to even the base model PS4 and Xbox One, much alone its upgraded counterparts that can claim 4K output. That’s especially frustrating given that some of its products, such as the aforementioned Bayonetta 2, are aesthetically gorgeous yet are doomed to never be displayed at their finest.

Cemu’s most recent update, v1.7.0 (now only accessible to Patreon supporters), expands the possibilities of those games by including configurable ‘graphics packs.’ These allow gamers to change the anti-aliasing, shadow, and resolution settings of a game, bringing it up to 4K quality. Cemu 1.7.0 and the graphics packs will be available to the public on January 16th, just after Nintendo unveils its new home system, the Nintendo Switch.

The specifics of the new home/handheld hybrid hardware have been scant, with rumors suggesting it may only render games at 720p when used as a tablet, perhaps increasing to 1080p when docked for television play. More will be revealed tomorrow when Nintendo officially unveils Switch specifications, but for now, Cemu may be the only (questionably legal) method to watch Nintendo favorites in 4K HD.

What’s the reason for Emulators?

There are several reasons why a game should be emulated rather than played on official hardware.

Cemu cannot easily replace a home console in your living room, but it performs admirably (and arguably better) when playing Wii U games on PC.

Where Can I Get Cemu Wii U Games Legally?

Despite the fact that emulators are commonly used to run pirated games, it is perfectly legal to run games that have been ripped from a real disc. To rip games, you’ll need an actual Nintendo Wii U homebrew console. The homebrewing process is a little complicated, but it’s worth it because a homebrewed Wii U is useful as a retro gaming console in its own right.

After you’ve homebrewed your Wii U, you can rip games with a program called DDD Title Dumper. Transfer them to your computer and save them all in one location on your hard drive so Cemu can easily access them. Most Wii U games are relatively small, ranging from 2 to 10 GB in size, so they won’t take up too much space.

Cemu isn’t the easiest emulator to use. The installation process is a little complicated, and you’ll need to download some files that are usually included with programs like this. This may change in the future, but for the time being, the majority of this will be done manually.

Download the latest release of Cemu from its website and unzip the folder. The folder will be named something like “cemu 1.15.3,” but you can rename it whatever you want and store it anywhere convenient (like your Desktop or Documents folders).
The following is an example of the content:

Don’t run Cemu just yet; there’s still some configuring to do. Cemuhook is a mod that will provide you with specific graphics packs and performance options. Download the release matching your Cemu version, and open the zipped Cemuhook folder. You can drag everything in here into your Cemu install folder.

Then there are the graphics packs. Graphics packs in Cemu serve lots of roles, from essential fixes for bugs on specific hardware, to make the game look or run better, to full-on mods for Wii U games. You can get all of the important ones from this Github tracker.

Open up the zipped folder, press Ctrl+A to select everything, and drag them all into the graphics packs folder in your Cemu install. You don’t have to copy them all if you’re only playing one game, but they’re just text files and are small enough that it doesn’t matter.

Shader caches are the last thing you’ll need to install. With the way Cemu works, every time it has to calculate a new shader, your game will lag quite a bit while it figures it out. Fortunately, once you’ve done it once, the answer is saved in a cache and used for all future calculations, so if you play long enough, it will be very smooth.

Because you probably don’t want to sit through hours of constant stuttering, you can download and use someone else’s cache instead. You can find a list of complete caches for various games on the CemuCaches subreddit.

Download the caches for the games you’ll be playing, and open up the .rar folder. The actual cache file is a .bin file which you’ll want to transfer to shader cache/transferable/ in your Cemu folder. After all of this, you can finally open Cemu.exe to run the emulator. If you can’t open Cemuu, make sure you have the latest C++ libraries installed.