What’s the Best Way to Unblock The Office on Netflix?

Just because news outlets say The Office isn’t on Netflix anymore doesn’t mean it’s 100% true. What those articles mean to say is that The Office left the Netflix US library (so you can’t watch it in the US anymore). But this show is still available on Netflix in other countries.

Let’s use StreamCatcher to find out. ProPrivacy (a major tech review site) developed this tool. It lets you quickly find out where Netflix titles can be streamed. In the case of Netflix’s The Office (US), the title is available in: 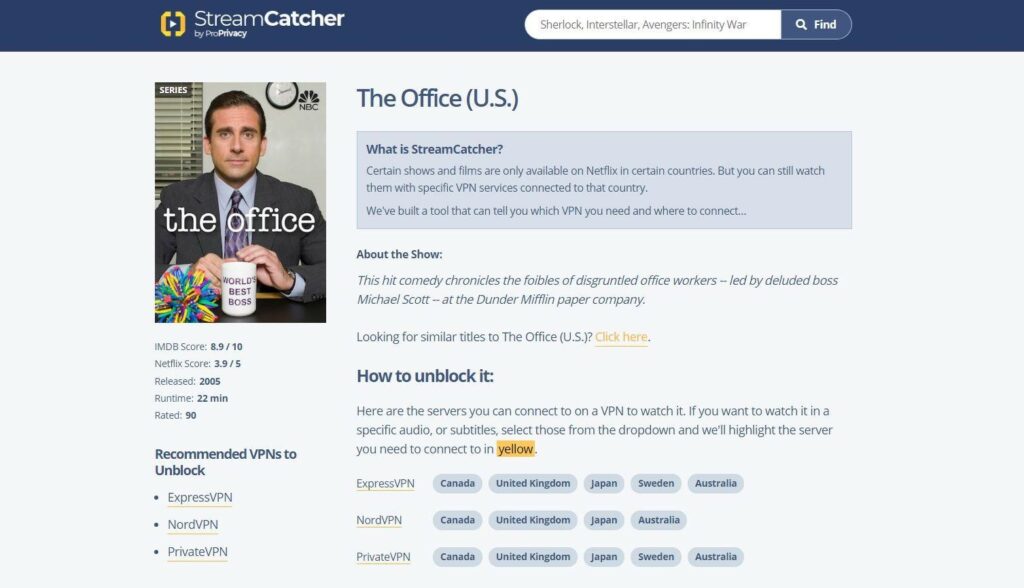 If you’re certain the show is available in more countries, please drop us a line in the comments mentioning where you can watch it.

Can You Unblock The Office on Netflix in the US?

Yes, you can. So no need to worry about signing up for Peacock to watch the series. You can actually use one of the following unblocking methods:

A VPN is software that hides your location when you’re online. Basically, websites won’t know what country you’re from anymore. If you connect to Netflix, it won’t know to send your traffic to the US library (which doesn’t have The Office).

How does that work?

Simple – the VPN intercepts your Netflix traffic and routes it through one of its servers. To get a better idea of what happens, here’s a quick look at how a VPN connection to Netflix looks like:

See how the VPN server sits between you and Netflix? Due to that, Netflix believes your connection is coming from the VPN, not your device. If you use a VPN server in one of the countries where The Office is available, Netflix will let you watch the show.

We tried that with a Canadian server from ExpressVPN and had no problem unblocking the series. 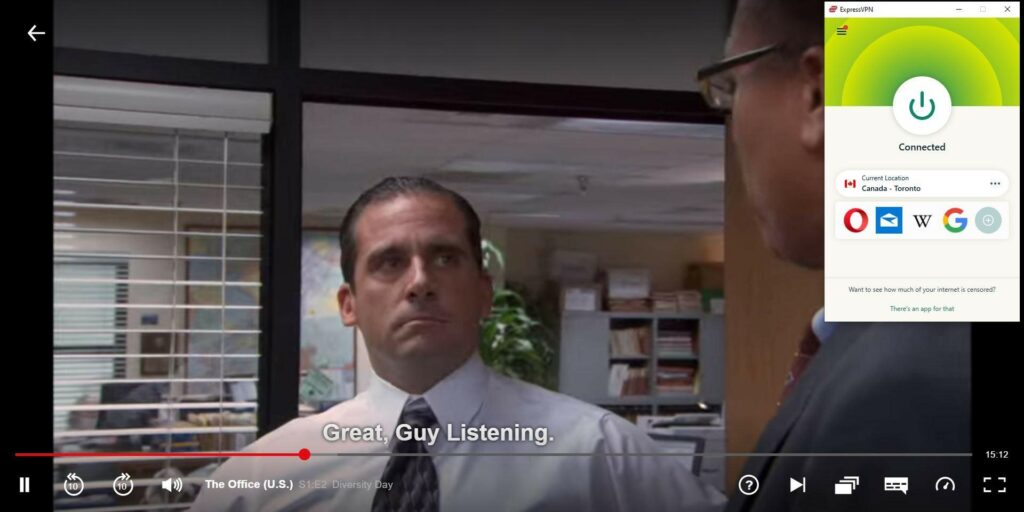 Proxies do the same thing as VPNs – they hide your IP address so that sites like Netflix can’t see where you’re from. As long as you use a proxy server in Canada, the UK, Australia, Japan, and Sweden, you’ll be able to watch The Office on Netflix. For more information about proxy and how to use them, you can find in this website https://smartproxy.com/.

Keep in mind proxies don’t encrypt your traffic too well. Hackers can still eavesdrop on it, and ISPs can still throttle your bandwidth. If you are looking for privacy, use a VPN instead.

These tools don’t hide your IP. Instead, they hide your location by editing your DNS settings and DNS queries to make sure Netflix doesn’t know what country you’re from. They also send your traffic through different proxy servers to help you bypass geo-blocks.

Like proxies, Smart DNS services can’t encrypt your traffic. So your ISP can still throttle your bandwidth. However, if you’re not worried about that, you’ll be happy to know that a lack of encryption means you won’t experience slowdowns.

Which Unblocking Method Should You Use?

Whichever one you like, really. It all comes down to your preferences. We had the best streaming experience with VPNs, meaning we didn’t get the Netflix proxy error as often with them.

However, we can confirm that all three unblocking methods work well. It mostly comes down to this:

Will Tor Unblock The Office on Netflix?

It’s hard to say. Tor also hides your IP address, so it should help you bypass Netflix’s geo-blocks. But we were never able to do that. Whenever we tried logging into our account with Tor, Netflix would always tell us our login credentials are incorrect.

We checked multiple times, and we were using the correct email and password. That’s actually one of Netflix’s lesser-known tactics to block people who use unblockers. So it wasn’t a mistake on our end.

Still, we saw Reddit threads where people were saying they managed to unblock Netflix titles with Tor. So, who knows, maybe it does work.

We can tell you one certain thing, though – you won’t get fast speeds if you use Tor. There aren’t enough servers to accommodate all the users (over 6,000 servers for around two million users). When we ran speed tests with Tor, we usually averaged 2-3 Mbps. That’s only enough to watch The Office in SD on Netflix.

Bottom line – if you’re looking to reliably unblock The Office and watch it in 4K or HD, use a VPN, Smart DNS, or proxy.

Can You Unblock The Office with Free Unblockers?

That’s not all. Even if you can unblock Netflix with a free unblocker, you should be ready to deal with annoyingly slow speeds. Since these services are free, their servers are often overcrowded. What’s more, free unblockers use bandwidth caps – anywhere from 500 MB to 2 GB per month. Obviously, that won’t even be enough to watch one season of The Office each month!

And if you use a random unblocker you never heard about, you’ll probably put your data at risk. Those services could log your data and sell it to advertisers. Or they could expose you to ads and malware.

To unblock The Office on Netflix, you have three options:

We personally recommend using VPNs, but proxies and Smart DNS tools work well too. Please let us know which method you like the most (and why) in the comments.