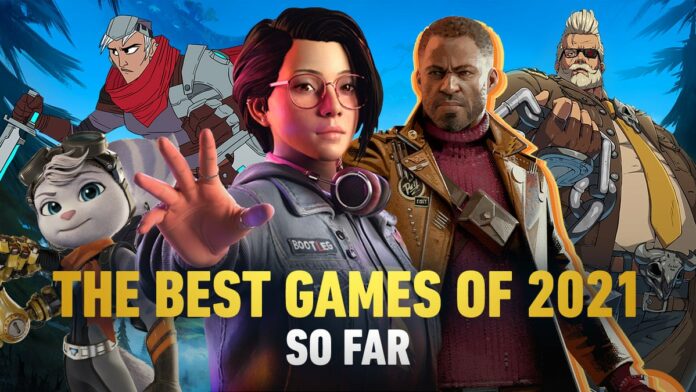 With a whole new generation of consoles arriving on the market, 2021 hasn’t been the ideal year for the gaming industry. Inventory problems, lack of materials, sky-high prices, and many delayed releases are just some of the setbacks the gaming world has been trying to overcome.

However, the industry keeps on working and there have been plenty of releases that have exceeded our expectations, whether because of their creativity, addictive gameplay, or technical quality.

In this article, we will list some of the best video games released in 2021.

The eighth chapter of the franchise developed by Capcom was one of the most anticipated games of 2021, and it did not disappoint.

The game takes place years after the events of Resident Evil 7: Biohazard (2017) and promised to offer a horror experience unlike anything seen in the series. In this new chapter, Ethan Winters, the protagonist, is leading a normal and pleasant life until he suffers a dramatic incident. His journey leads him to a village full of werewolves, vampires, and generally dangerous people, including the internet sensation Lady Dimitrescu.

Resident Evil Village features a little bit of everything: frenetic action, gore, and psychological terror. From a first-person perspective, one of the title’s greatest assets is the 4K resolution and Ray Tracing technology, which give Village a unique look.

Since the release of the first title in the franchise, in 1996, the Japanese game has become the best-selling horror game series in the world, with an astounding 117 million units sold, and has had an influential role in popular culture. Resident Evil has inspired 28 video games, six films, two television series, comics, and even online slot games such as Resident Evil 6, where players can get a sense of the atmosphere of Raccoon City while watching out wandering zombies. Designed with the original series in mind, the slot adopted some of the settings, objects, and sounds of the franchise.

Released exclusively for PlayStation 5, the game is Sony’s opportunity to showcase the full power of PS5’s SSD storage. To face up to the evil emperor from another reality, Ratchet and Clank constantly jump into different galactic dimensions that transport the player to very distinct scenarios. Ultimately, this interdimensional adventure is technically and visually impressive, as there are loading screens or lag.

Moreover, the game does well in other aspects as well: it has a light story, captivating characters beautiful graphics, and incredibly hectic but enjoyable gameplay. As with every game in the series, there’s a huge arsenal of ridiculous weapons, which have always been a highlight of the franchise. As usual, you don’t need to worry about past titles, as you don’t need to know the characters to enjoy this crazy ride.

It may seem like just another anime-looking game, but Scarlet Nexus is much more than that: it’s a Japanese action RPG full of twists and turns. In a futuristic Cyberpunk world, humanity is about to be wiped out by bizarre creatures that devour human brains and Other Suppression Force soldiers are the population’s only chance to survive. These soldiers are linked to a central computer through which they can use various powers and communicate with each other telepathically.

The execution of the concept is phenomenal and manages to convey the idea that the real world is practically merged with the digital, giving rise to a new reality of superhumans.

Early on, the player must choose to control Yuito Sumeragi or Kasane Randall. This decision changes the direction of the plot completely because, in addition to having different personalities, the characters follow different paths.

Although the concept is new, there is a lot of positive influence from Japanese animation. The range of characters is highly varied and the game has both moments full of action and relaxed, silly dialogue. The game was mostly met with positive reviews and praised for its challenging and addictive gameplay.

These are our top picks for the best games of 2021 so far. Nonetheless, you should keep an eye out for other upcoming releases, such as Far Cry 6, Battlefield 2042, Call of Duty: Vanguard, Forza Horizon 5, or Halo Infinite.